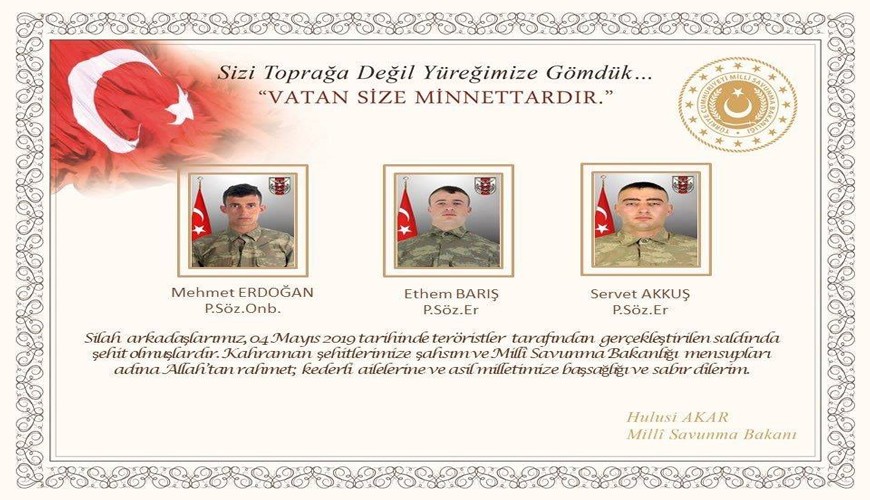 Death announcement of 3 Turkish soldiers who were killed in a military operation by Kurdistan Workers' Party PKK southeast of Turkey.

Social media pages reported that “Turkish Ministry of National Defence mourned on Saturday three soldiers who were killed during the liberation of Maránaz and Malkieh in northern Aleppo countryside,” during clashes with Syrian Democratic Forces SDF’; these pages combined the news with a photo of a death announcement of three Turkish soldiers.


Verify-Sy checked the information; it turned out that the photo shows three Turkish soldiers who were killed in Hakkâri province in the southeast of Turkey on 4 May, due to a shell fired by Kurdistan Workers' Party PKK from their bases in northern Iraq, according to Turkish Defence Ministry.

Verify-Sy was unable to obtain reliable information about the number of causalities during the clashes in Mar’anaz northern Aleppo between SDF and Turkish forces supported by Syrian factions.

By the same token, social media pages circulated a photo of a Turkish soldier, who was described as “Jalal al-Deen Özdemir, the Special Forces commander”, claiming that “Turkish fighters”, in reference to SDF fighters, killed him during clashes near Maránaz.

Verify-Sy checked the photo; it turned out that Özdemir, who was a captain at Special Forces, was killed during an attack near Azaz city, according to Turkish websites., while Major General Ahmed Chorbaji is the Special Forces commander, and İsmail Metin Temel is the Operation Olive Branch commander who also serves as the Second Army commander.