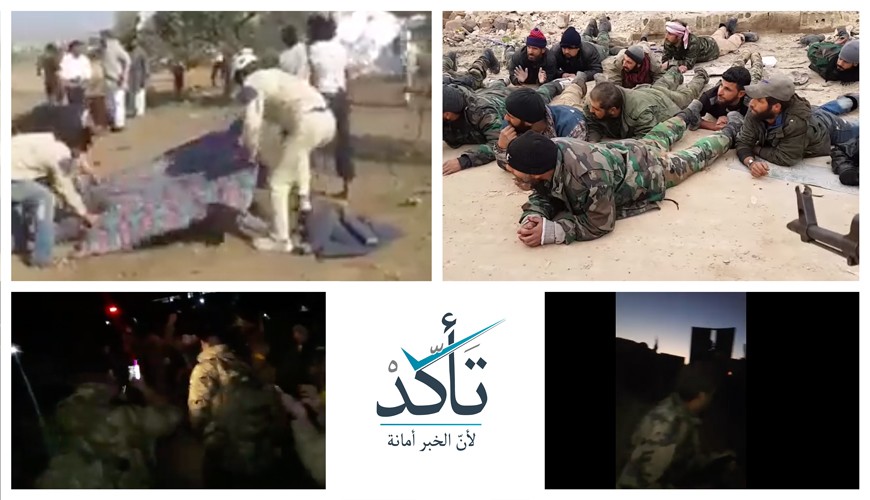 A collection of images taken from the videos

As bombing intensifies in Idlib and Hama countryside during the last week, in addition to clashes between Assad forces and opposition factions, tens of misleading media reports were recently posted on social media. It has been suggested that they are related to the current events in Hama and Idlib, while they are actually old or irrelevant to what is currently taking place there.

Activists at Ta’akkad al-Harek (Verify Quickly) group spotted a video, which was recoded at night, and was claimed to be of opposition factions taking back control of Tal Othman and Janabra villages. It turned out that it was originally posted on 3 April on YouTube, entitled “Heavy clashes in al-Baghuz between Islamic State and Syrian Democratic Forces as IS refuses to surrender.”

Another video was spread, which was claimed to be of giving aid to wounded people and recovering bodies in an area that was supposedly identified as a farmland. It was also claimed that the video shows a recent Russian airstrike. In fact, the video was posted in 2014; it shows al-Nukair camp in Idlib countryside, moments after being bombed.

A video, which shows men in military uniforms chanting “Mohammad will always be our leader” and “Allah, we are at your service”, was also circulated on social media. It was claimed that it shows opposition factions entering Kafr Nbudeh town. Verify-Sy checked the video; it turned out that it was posted in January 2018, entitled “Free Syrian Army preparations around the Kurdish city Afrin.” Our team was unable to verify the actual date/location of the video. However, it was posted 13 months ago, which makes it irrelevant to the current situation in Kafr Nbudeh, Hama countryside.

Our team also spotted a video that shows men in military uniforms seems to be captured by an armed group. Some pages said that it shows “Revolutionists capture members of the terrorist militia”, in reference to capturing members of Assad forces by opposition fighters. It turned out that the video was originally posted in January 2018, entitled “The first moments of capturing a group of Assad militia in Khwain town, Idlib countryside”, which coincided with clashes in that area between Assad forces and opposition factions.

It is worth mentioning that Verify-Sy is doing its best to spot all the misleading media reports which has been spreading since the beginning of the military escalation in Idlib and Hama countryside. Dear followers, you are welcome to join our efforts in filtering the misleading information at our group Ta’akkad al-Harek (Verify Quickly).