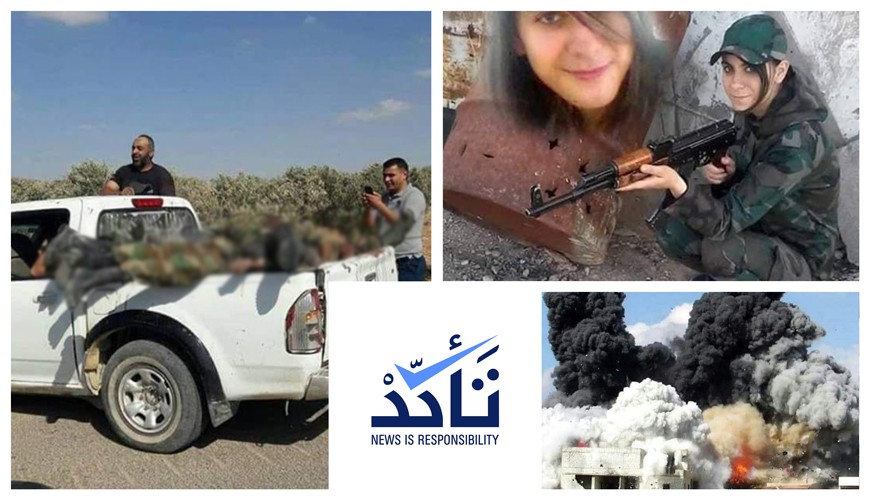 A collection of images taken from social media

Assad regime military offensivte against Idlib and Hama countryside coincided with the spread of fake photos with misleading description, which in fact are photos of old events, or unrelated to the current escalation.

Activists at Ta’akkad al-Harek (Verify Quickly) group spotted a photo of micro-trucks (pickup trucks), which carries corpses of people in military uniform. It was claimed that it shows “a massacre of Assad militias in al-Janabrah village in northern Hama.” In fact, the photo was grabbed from a video, which was taken in 2014 in Dara city, during an attempt of Assad regime to advance in the city.

Another photo of what seems to be a residential area being bombed was circulated on social media. It was claimed that the photo was taken in Idlib; It turned out that it was grabbed from a video, which was first published on the 29th of January 2014 in Darayya.

Our team also spotted another photo of a woman in uniform, it was said that she had fought alongside the regime forces in an attempt to take control of al-Janabrah village in Hama countryside. It turned out that the photo dates back to 2015, which is of Assad Army LT Reem Samir Hasan who was killed during clashes in al-Ziarah village in southern Idlib countryside, according to pro-regime media.

It is worth mentioning that Verify-Sy is doing its best to spot all the misleading media reports which has been spreading since the beginning of the military escalation in Idlib and Hama countryside. Dear followers, you are welcome to join our efforts in filtering the misleading information at our group Ta’akkad al-Harek (Verify Quickly).

You are welcome to visit and join our group below: