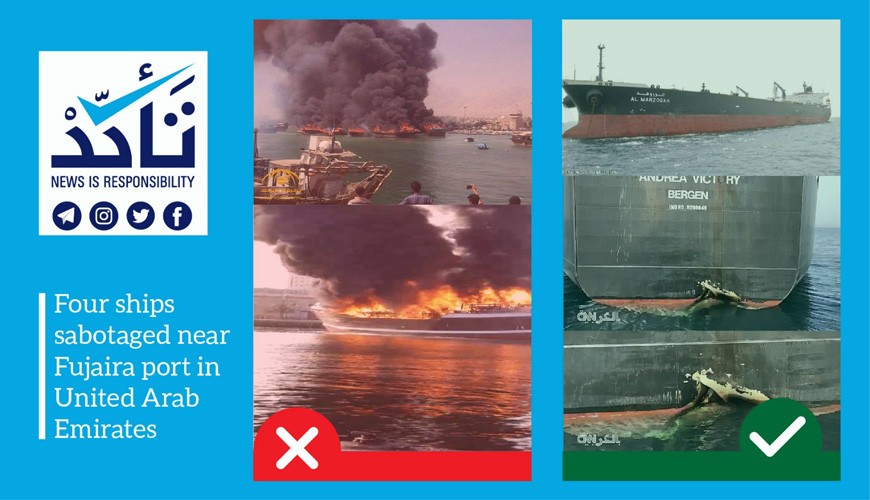 Misleading photos and videos of "sabotaging ships off UAE coast"

Photos and videos, which were claimed to be of 7 oil tankers burning near Fujairah port, were circulated on social media.

Verify-Sy checked the photos; it turned out that they are unrelated to the incident. They are of seven Iranian sailboats that caught fire in Kan’an port in 2017 in Bushehr province, southern Iran.

Other activists spread a video on social media, claiming it shows the explosion of three ship at Fujairah port.

After checking the video, our team concluded that the ship, which appears in the video, is not among the recently vandalized ships. The video actually shows a wooden ship carrying fuel and cars, which engulfed in flames at Sharjah's Port Khalid, UAE, on 8 May 2019.

Four commercial vessels were targeted by “sabotage operations” near the territorial waters of the United Arab Emirates, the foreign ministry said on Monday.

The incident occurred near the UAE emirate of Fujairah, which lies just outside the Strait of Hormuz that is considered to be a vital passage of oil and gas, the ministry said in a statement.

Regional tensions have increased, with the US sending battleships and missile battery to the Arabian Gulf, while Tehran has threatened to close the Strait of Hormuz if it was prevented from exporting its oil.