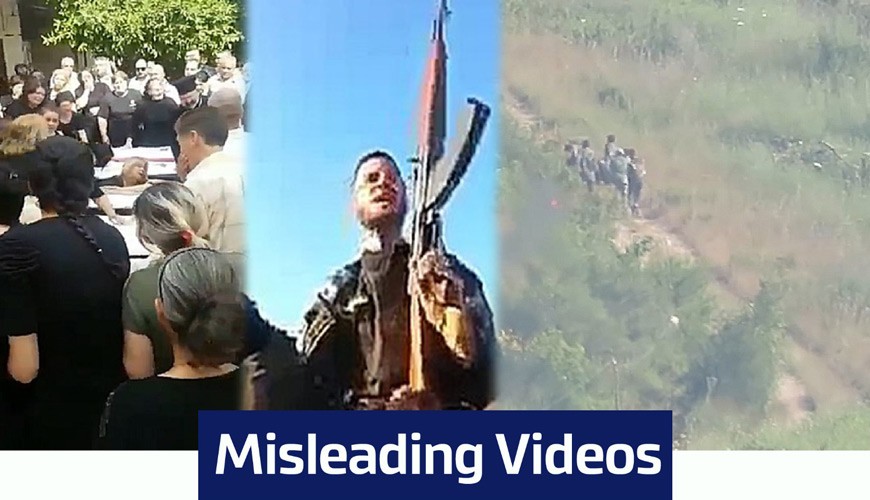 Several videos have gone viral over the past few days as if they are related to the current escalation in northwest Syria between Assad regime forces and opposition factions, some of which are old while others are fake.

Activists at Ta’akkad al-Harek (Verify Quickly) group spotted a video, which shows heavy clashes; media activists claimed that it shows clashes that occurred during the offensive to liberate Kafr Nabudah in western Hama, which was carried out by opposition factions. Through a careful check, our team found out that the video was posted on YouTube in February 2017.

Our team also spotted another video that shows a rocket landing near an armed man. The pro-Assad Facebook page Nabd Soria claimed that he is a member of Hay'at Tahrir al-Sham (HTS). It turned out that the video is old; it was posted on YouTube over four years ago.

Coinciding with the recent escalation, a video of a truck carrying coffins of members of regime militias. Our team found out that the video shows a funeral of members of Assad forces, who were killed in clashes with Islamic State in Iraq and the Levant (ISIL) on Khanasir road in March 2015.

In the same vein, a video of women mourning dead people who said to be killed in the recent battles in northern Syria. It turned out that it is of a funeral of people who were killed by rocket attacks in September 2018, according to pro-regime pages.

On the other hand, activists posted a video claiming that it shows targeting of Assad forces by guided missiles in Hama countryside, where heavy clashes occurred. After conducting an in-depth check, our team concluded that the video shows an FSA faction, The Second Coastal Division, targeting regime forces by an anti-tank guided missile ATGM in Turkmen Mountain frontline around one year ago.

Few days ago, UN warned of the consequences of a humanitarian disaster that might threatens the international peace and security if the current hostilities in northwest Syria continued.