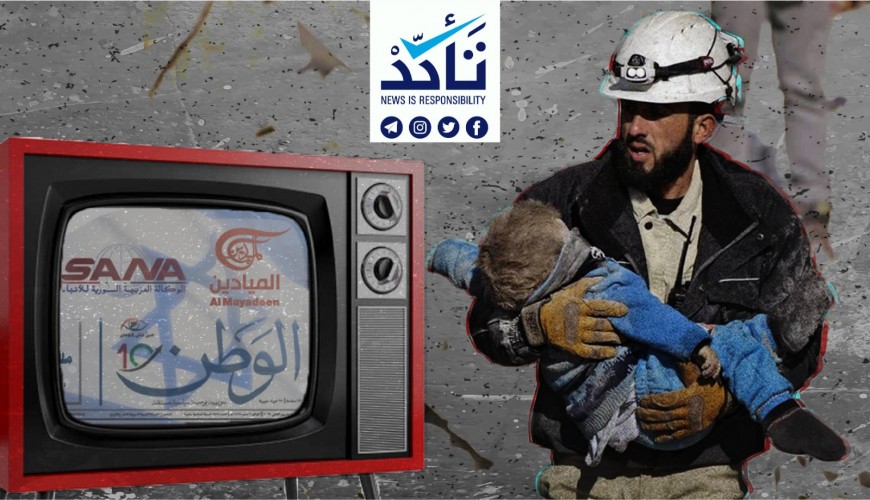 Pro-Assad media outlets reported on an investigative news story broadcasted by Israeli Channel 12 that is entitled “The True Story: The Relationship with Syria.” They claimed that the report expose how the “Israeli authorities” trained Syria Civil Defense volunteers, also known as the White Helmets, to “stage chemical attack massacres.”

Verify-Sy team spotted these reports, and in cooperation with two fellow independent journalists who speak Hebrew fact-checked these claims about the news story in the “Oveda” program broadcasted on Channel 12 Hebrew. First, we will go through these allegations and then we will present the results of our fact-checking.

The Syrian Arab News Agency (SANA), Assad state official news agency, reported that “Enemy’s media outlets acknowledge the occupation’s role in fabricating chemical attacks by the White Helmets terrorists,” referring to the Israeli Channel 12 news story. SANA claimed that the story assures “the vital role of the Zionist entity government in fabricating the claims of the Syrian Arab Army (SAA) chemical attacks against civilians in the terrorists-held areas. It supervised and cooperated with the White helmets terrorists to train terrorist groups on conducting such fabrications.”

“The Israeli Channel 12: Israel Fabricated Syria’s Use of Chemical Weapons,” al-Mayadeen TV channel reported on the news story, claiming that “the report shows how Israel obtained a fabricated evidence of Syrian President Bashar al-Assad use of chemical attacks.”

A report by the pro-Assad al-Watan newspaper is entitled “Occupation’s Media: Our Government Trained the White Helmets to Fabricate the Chemical Attacks” claiming that the Channel 12 story assures that “the Israeli government supervised the training of the so-called White Helmets members, who are affiliated to al-Nusra Front terror group, to fabricate chemical attacks in Syria.”

What are Verify-Sy findings after watching the news story?

Two journalists who speak Hebrew helped us with fact-checking these allegations. It turned out that there is no mention or hint about the White Helmets organization in the report. Furthermore, the report did not mention any information about training the Syrian opposition “to stage chemical attacks in Syria,” which contradicts SANA and al-Watan allegations.

On the other hand, al-Mayadeen contradicted its own allegations when it broadcasted Aluf Yair Golan interview, the former Deputy Chief of the General Staff of the Israeli army. “I asked individuals who oppose the Assad regime to bring evidence of chemical attacks.” Said Golan, according to al-Mayadeen translation, adding that members of the opposition brought evidence of nerve gas use in Syria. Golan did not mention any information about staging evidence, but he assured that the evidence are real.

In regards to the truth about the investigative report, it shows testimonies of former members of the Israeli Intelligence Community, about their cooperation with members of the Syrian opposition aiming to gather intelligence on the regime and the Iranian pro-regime militias.

The OPCW said it is confident that government forces used the nerve agent Sarin in an attack on the town of Kahn Sheikhoun in Idlib province in April 2017 in which more than 80 people were killed, according to Amnesty International report in February 2018. More than 50 chemical attacks were identified by the various sources as having been committed by Assad regime. Of these, 42 were documented to have used chlorine, according to Human Rights Watch in April 2018.