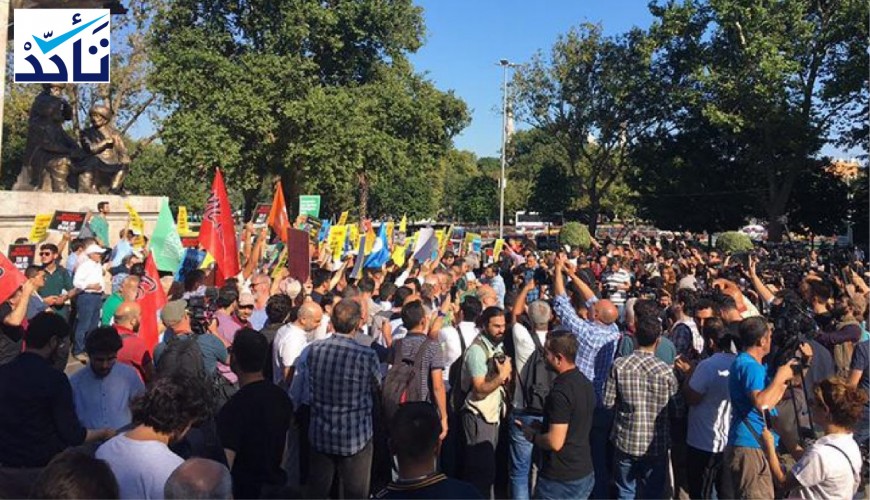 Turkish news sites claimed that dozens of Syrians joined a protest organized by the Syrian Associations Platform in Istanbul on Saturday against recent decisions by Istanbul Governor’s Office to remove unregistered Syrians from the city.

İstanbul Gerçeği (The Truth of Istanbul), a Turkish website, reported that the Syrian Associations Platform and pro-refugees organizations called for a protest in Istanbul’s Sarachane district. ABC, a Turkish newspaper, also reported that Syrian organizations called for the protest, adding that the protest was met with a counter-protest of Turkish nationalists; Police reportedly intervened.

Verify platform reached out to Turkish human rights activists; they denied any participation of Syrian individuals or organizations in organizing the protest.

Birgün, a Turkish newspaper, reported that the Free Thought and Education Rights Association (Özgür-Der), the Association for Human Rights and Solidarity for the Oppressed (MAZLUMDER), and Istanbul Journalists Association organized that protest; about one hundred people joined it. The newspaper also reported that the security forces detained 7 individuals who were provoking the protesters.

Turkish journalists Tunca Ögreten and Rabia Çetin reported that around 100 persons participated in a protest organized by pro-refugees associations against the recent decision regarding Syrians in Istanbul, according to Halk TV, a Turkish TV station; a counter-protesters attacked the protesters, which resulted in police immediate intervention.

Despite the fact that Syrians did not take part in the pro-refugee rights protest, chants like ‘We are all brothers,’ ‘Down with fascism,’ and ‘Brotherhood is alive’ were the distinct feature of the protest, according to Euronews.

Last week, the Governorship of Istanbul set a one-month deadline for Syrian refugees living in Istanbul without being registered at the city to return to provinces where they are registered or face forced removal to those provinces.

About one million and 69 thousand legal migrant live in Istanbul, including 547 Syrians under temporary protection, according to Turkey’s Interior Ministry.