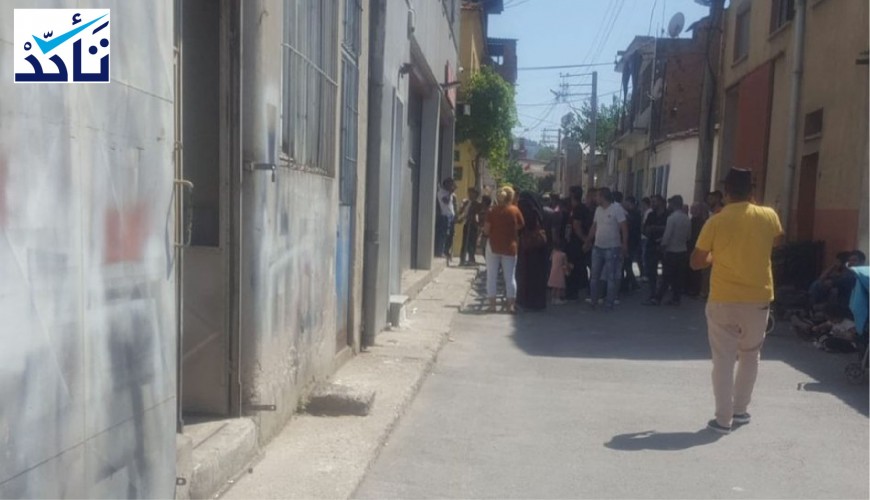 Former Turkish MP Yusuf Halacoglu tweeted a photo that shows a gathering of persons and claimed that it shows Syrians waiting to be granted Turkish citizenship in Turkey’s Izmir.

“The interior minister says the contraveners will be expelled out of the city. On the other hand, citizenship is granted to Syrians. You see Syrians who are being granted citizenship in front of the Directorate General of Population and Citizenship Affairs on 1510 St. in Umurbey neighbourhood, Alsancak in Izmir. Why this remote place?” Halacoglu tweeted.

Verify platform inspected the content and location of the photo, and reached the conclusion that the building shown in the photo is specialized in issuing and updating the information of temporary protection cards (aka “Kimlik”), which is given to Syrians residing in Turkey under temporary protection. Therefore, the building is not related to the centers where procedures for naturalization takes place.

How did we verify the location?

A sign of a furniture store called “Mobilya Yücel Usta” is seen near the top-left corner of the photo. After searching for the shop’s address, it turned out that it is in Izmir. We compared some elements (the sidewalk, doors, and buildings) shown in Google Maps images of the store to elements of the posted photo, we were able to locate the building.

A search for the address of verification centers for Syrian refugees in Izmir will show that it is located right next to the furniture store. If you click on “Izmir” city name on the United Nations High Commissioner for Refugees (UNHCR) webpage that provide Syrian refugees with information about verification of Kimlik cards, the address of the verification center will be shown, which reveals that the building is located next to the furniture store.

Turkey’s Deputy Interior Minister Ismail Catakli retweeted Halacoglu’s tweet adding a text that reads, “This place is not the city's Directorate General of Population and Citizenship Affairs; it is the Address Registration and Data Update Unit of the city's Migration Administration. Not a single procedure for naturalization takes place here. What you wrote is a lie. Does this suit you?”

Despite the angry comments Halacoglu received regarding his misleading tweet, he did not delete it.

Yusuf Halacoglu has over 730,000 followers on Twitter. In 2017, he co-founded the Good Party. He is a former Nationalist Movement Party (MHP) Kayseri deputy between 2011 and 2015. He served as the head of the Turkish Historical Society.

UNHCR said as of late 2016, the Directorate General of Migration Management (DGMM) has been carrying out a verification of Syrians residing in Turkey under temporary protection, through updating and completing the information taken during their registration on DGMM’s website.