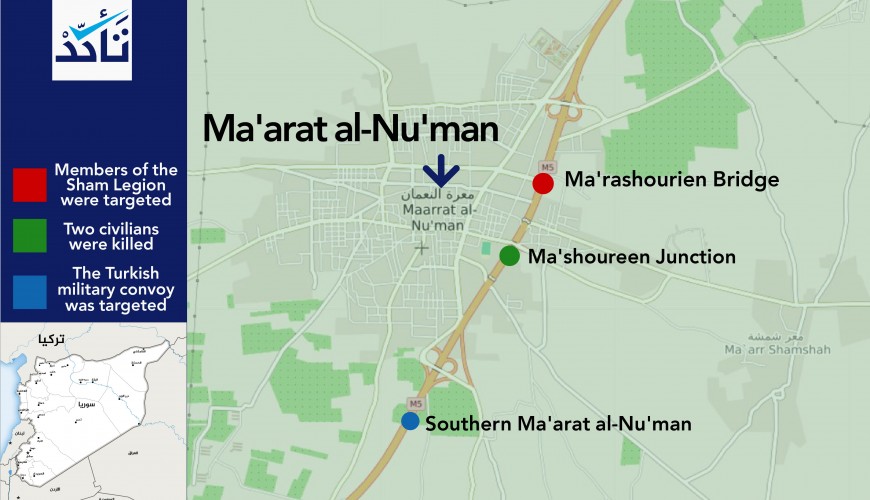 Note: This report covers the events until the evening of August 19, 2019.

News websites and social media pages reported that Assad airstrikes targeted a Turkish military convoy on Khan Shaykhun road this afternoon in Idlib’s southern countryside. It has been reported that the Turkish convoy was heading to Khan Shaykhun city in order to establish two observation posts in southern Idlib province.

Verify platform Northern Syria reporter has reported that regime warplanes targeted by machine guns members of the Sham Legion of the National Liberation Front who were waiting for the Turkish convoy on the international road that runs through the east side of Ma'arat al-Nu'man in southern Idlib province. The attack has resulted in killing Mohammad al-Salloum, a member of the legion, and wounding two more. In addition, regime double-tap airstrikes have killed two civilians while the convoy was passing on the international road.

Regime warplanes also targeted the Turkish convoy by machine guns in southern Ma'arat al-Nu'man city, no damage were reported; the airstrike hit an area about 100 meters away from the convoy, our reporter added.

Our reporter explained that the Turkish convoy stopped about 2 kilometers away from the north of Haysh town because the town was hit by regime airstrikes and artillery.

Besides, the Turkish Defense Ministry stated that three civilians were killed and 12 more were wounded by the airstrikes that targeted the convoy. The convoy was heading towards the Turkish Observation Point No. 9 in Hama’s northern countryside, it added.