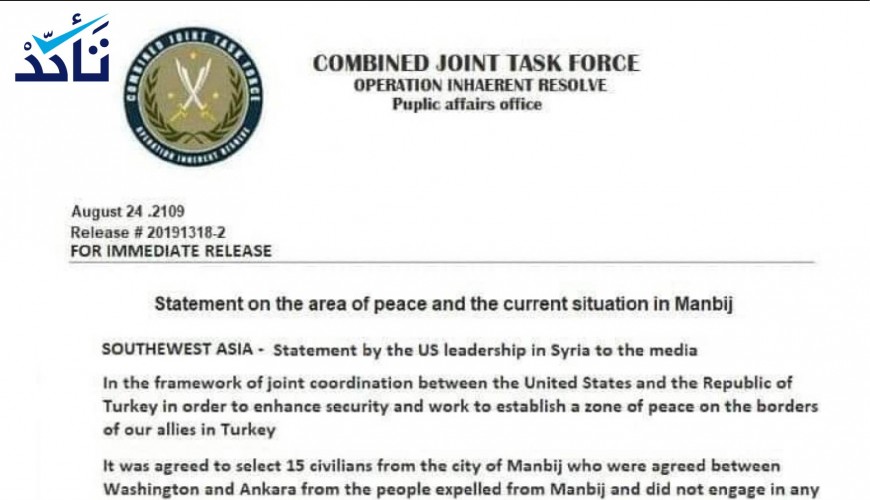 Social media pages circulated a statement claiming that it was “issued by the U.S. operations leadership, after the US-Turkey agreement on Manbij in northern Syria.”

The statement, which was said to be issued on August 24, 2019, includes Operation Inherent Resolve symbol, the U.S. campaign to fight ISIS in Syria and Iraq.

The statement claims that in the framework of joint coordination between the U.S. and the Republic of Turkey, it was agreed to select 15 civilians from the city of Manbij who were expelled from Manbij and did not engage in any terrorist acts. Beside, ten people from Manbij civilians were also agreed to form the joint administration of the city.

The statement also says the road map for Manbij will continue to be adhered to in order to achieve peace and security in the city and prevent the entry of any other forces outside the agreement between the U.S. and Turkey.

Since ISIS was expelled from Manbij, it has been under the control of the US-backed Syrian Democratic Forces’ Manbij Military Council.

Few days ago, Pentagon spokesperson Sean Robertson said that the discussion between the U.S. and Turkey are ongoing in Ankara, adding that the initial understanding will prevent any Turkish incursion into Syria, according to US based Alhurra TV channel.

In June 2018, U.S. Secretary of State Mike Pompeo and Turkey’s Foreign Minister Mevlut Cavusoglu announced signing a road map for Manbij, which supposedly had to be implemented within 6 months.