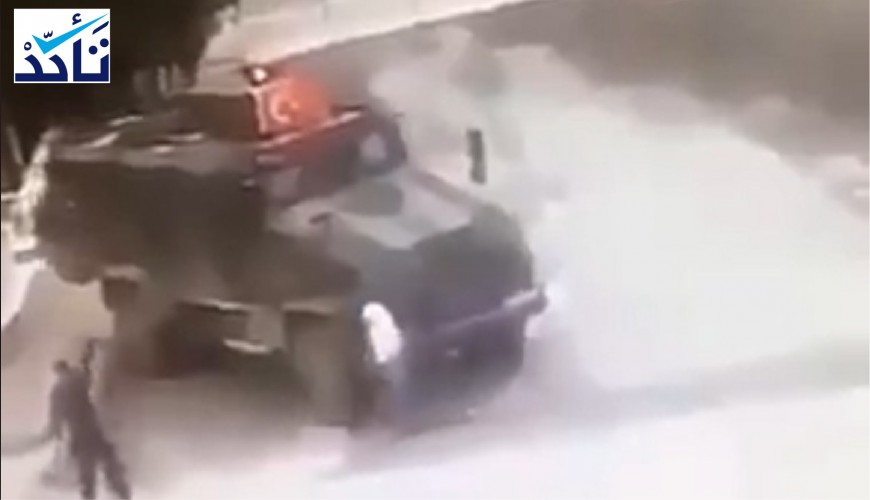 A video that shows a Turkish military vehicle running over an elderly woman walking down the street has circulated on Facebook on August 28, 2019. It has been claimed that a Turkish soldier driving a vehicle ran over an elderly woman in the city of Afrin located in Aleppo countryside. Egyptian and Saudi tweeters have also posted the video and spread the same claims.

Verify platform inspected the video and reached the conclusion that it dates back to 2017; the incident took place in the Lice district of the Turkish province of Diyarbakir.

According to Turkish media outlets, the 85-year-old senior woman was heading to a post office branch of the PTT, the national post and tele/graph directorate of Turkey, to get her old-age pension. She was crossing a closed road where she was ran over by a military vehicle.

According to Hürriyet newspaper, the driver was unable to see her despite being warned by one of the soldiers who was nearby. On that basis, the driver was held in custody. The case was transferred to the criminal court.

In mid-2019, he was found guilty of “negligence” and sentenced to 3 years of prison. The sentence was reduced to 2.5 years, according to Turkish news outlet T24.

Verify platform reporter confirmed that no civilians were recently run over by a Turkish army vehicle in Afrin. However, several Turkish military vehicles actually ran over Syrian civilians previously, one of which was documented by Syrian activists in which an armoured vehicle ran over a senior man in a wheelchair in his 60s near the Bab al-Salama border crossing around a year ago.

Many fake news, photos, and videos about the city have spread after the Syrian opposition forces and Turkish military had seized control of Afrin.

Syrian and international human rights organisations along with activists accuse the Syrian opposition factions and the Turkish army of committing serious human rights violations against civilians in Afrin since they have seized control of the city last March.