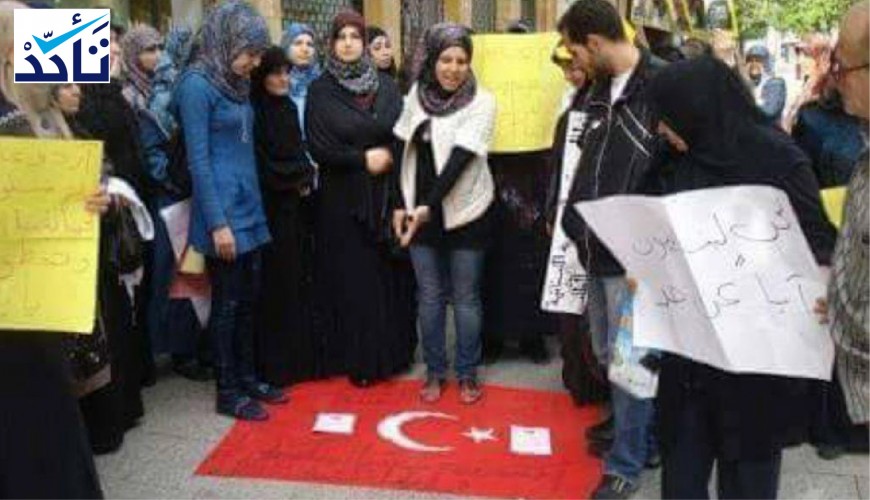 Is This Photo of Syrians Stomping on Turkish Flag?

Besides, a Turkish tweeter has posted the photo with a text that reads, "Syrians who were granted the Turkish citizenship today protested against the Turks stomped on the Turkish flag on the anniversary of the Armenian Genocide 4 years ago."

In addition, another tweeter said: "Four years ago, Syrians stomped on the Turkish flag by their feet during the commemoration of the so-called the Armenian Genocide anniversary." Besides, another tweeter, commenting on the photo, said: "We don't want these dishonest stateless people, we don't want Syrians."

The photo has gone viral on Twitter with the hashtag #suriyelileriistemiyoruz repeatedly used by thousands of Turkish tweeters expressing their rejection of the Syrian presence in Turkey.

Verify platform inspected the photo and reached the conclusion that it was taken in the Lebanese capital Beirut, in front of the Turkish Airlines office in 2013, during the commemoration of the Armenian Genocide by families of former Lebanese kidnapped individuals in the Syrian city of Azaz.

The photo shows signs such as "We are full-blooded Lebanese," and "We demand the Republic of Lebanon to call the Turkish ambassador."

Lebanese newspaper An-Nahar inserted the photo in an article titled, "Families of Abductees Share Armenians Memory of Turkish Massacres against Them."

At the time, the families of the abductees said that Turkey is responsible for the safety of their sons and demanded that Turkey put pressure on the opposition to release them. Besides, they launched sit-ins in front of the Turkish embassy and broke into the Turkish cultural center in Beirut.

In May 2013, the Syrian opposition forces detained 11 Lebanese near the city of Azaz located in the northern countryside of Aleppo, while they were returning from Turkey from a visit to holy Shia sites in Iran. They were released after 1.5 years by Qatar's brokering.