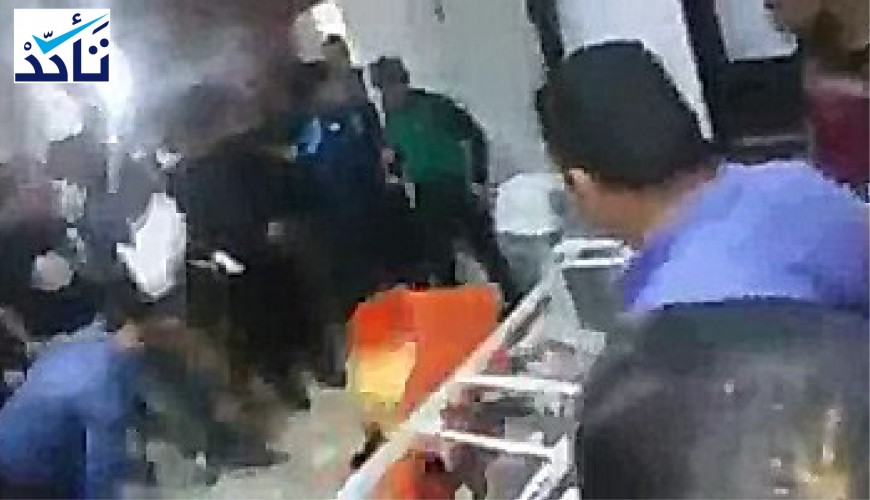 A video that shows a group of persons battering a man has circulated on social media. It has been claimed that the man "is Sunni (Muslim) who was lured by his Shiite friend into a husseiniya (Shiite mosque) and killed him for revenge for Hussein."

The same video was recently posted on YouTube, and said to be of "an incident of killing a terrorist in al-Najaf hospital," claiming that "the hospital staff and the security forces of al-Najaf (city) made an example of him."

Verify platform inspected the video and reached the conclusion that it circulated on social media in March 2015, and said to be of "torturing and murdering an Iraqi man in al-Kazimia hospital in Baghdad on the pretext of being a member of ISIS organization." Furthermore, other accounts posted the video titled "Battering Citizen in Al-Kazimia Hospital," without suggesting that the victim belongs to ISIS.

Verify platform could not reach a conclusion about the circumstances surrounding the incident. However, the fact that it circulated four years ago refutes the claims that the incident took place few days ago in the al-Najaf governorate and that the victim was murdered in revenge for Hussein.

The Iraqi official news agency have not reported on a "terrorist" attack in the al-Najaf governorate over the past two weeks, whereas the Popular Mobilization Forces "Hashd al-Sha'abi" announced conducting a proactive security operation to secure the pilgrims coming to the governorate in parallel with the imminence of Ashura commemoration; Shiite pilgrims rally in the city of al-Najaf southern of Iraq, to " the commemoration of the murder of Hussein, the grandson of the Prophet Mohammad (PBUH)."