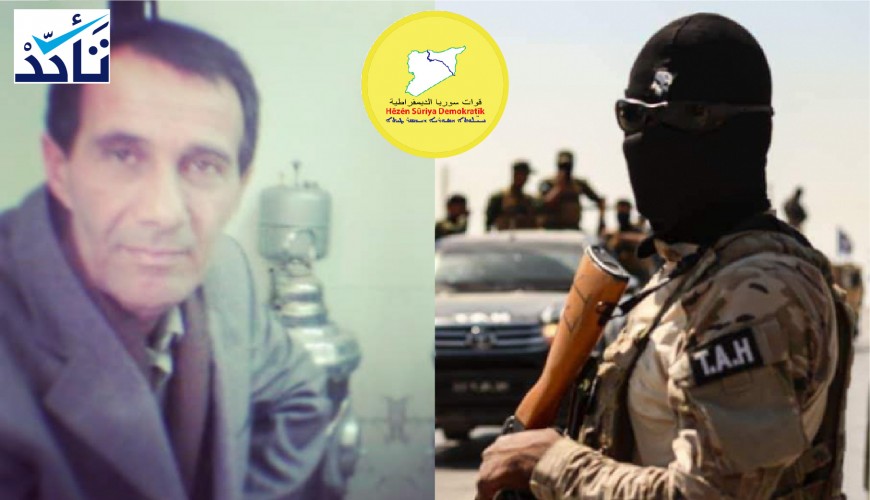 The Syrian Democratic Forces (SDF) have arrested Jamal Mabruk, a Syrian civil engineer, on October 10, in a joint operation with the Global Coalition To Defeat ISIS. The operation targeted Mabruk’s house in the village of Swaydia Zagyra western the city of Tabqa, Raqqa.

However, the photo attached to the tweet shows only money and two passports; no weapons or explosives appear in the photo.

Activists from the city of Tabqa reported that Mabruk was arrested with his son Kathem in the raid.

Since his arrest was reported, Verify-Sy platform inspected the circumstances surrounding the case and the validity of the accusation.

According to our search, Mabruk’s arrest was not reported by Arabic-language platforms, including pro-SDF ones, nor was it reported by international media.

Verify team reached out to locals, including Mabruk’s neighbors and a number of his relatives, who spoke on the condition of anonymity for security reasons and because they are afraid of being captured.

“Jamal was born in 1958. He is married with 3 girls and 3 boys,” one of his relatives told Verify-Sy. “He headed the municipality of Tabqa for two cycles from 1987 to 1995. He then resigned and worked contractor and entrepreneur.”

Speaking of the period when ISIS controlled Raqqa, he said that al-Mabruk “has not worked as a contractor during that period; he worked as vegetable gardener near his house in the village of Swaydia Zagyra.”

“He was not involved at all with ISIS; actually, he was arrested by them for almost 10 days, a few days after they had seized control of al-Tabqa Military Airport in August 2014, for suspecting him of forming an anti-ISIS cell,” he recalled. Al-Mabruk “was arrested by the regime before the beginning of the Syrian revolution” in 2011, he said.

A family member of al-Mabruk told Verify-Sy that “Jamal started working for the organization in 2017, a while after SDF had seized control of the city of al-Tabqa.”

“SDF raided his house after midnight, while the global coalition’s helicopters were flying over his house,” he said. “Shortly after that, the engineer (al-Mabruk) suffered from an excruciating condition because he suffers from diseases.”

“The agents stayed for over an hour in his house; they assaulted the women, and took one of (his) children to another room where they battered him,” he added. “The agents then arrested Jamal and his son Kathem.”

He also told Verify-Say that “his family inquired indirectly about his place of arrest, and was informed that Jamal is arrested at the ‘Aied’ prison in the city of Tabqa. On Saturday, October 5, (his family) knew that the interrogations of (al-Mabruk) were stopped until an indefinite period because of the tensions between SDF and Turkey.”

One of al-Mabruk’s neighbors, M.A., confirmed to Verify-Say that “Jamal has a very good reputation among (the inhabitants of) Raqqa. He has never supported ISIS; on the contrary, he is known for opposing the regime before the revolution, and (opposing) ISIS after it seized control of the area.”

Of note, the Syrian Democratic Forces (SDF) have arrested a number of activists and employees at NGOs based in the province of Raqqa last August, including Dr. Hasan Fawwaz al-Kassab who works as a coordinator at Creative Associates International, charging them with forming an ISIS assassination cell.

At the time of the incident, Verify-Sy published a report about the accusations against M.D. Kassab along with the other activists arrested with him.