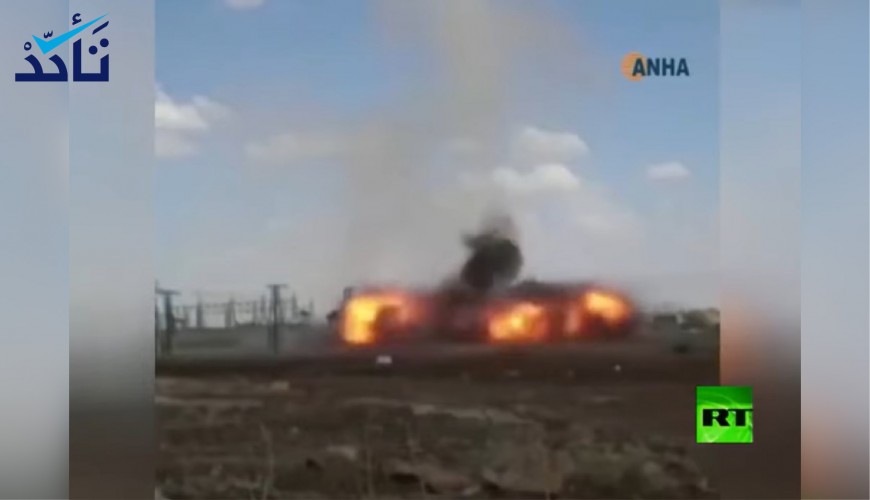 Russia Today has shared Thursday a video that shows a bomb lands near a power station targeting a number of persons, claiming that it was of Turkish bombardment on the city of Ra's al-Ein in al-Hasaka, northern Syria.

A watermark of pro-Democratic Union Party (PYD) Hawar News Agency was placed on the video, which was titled by Russia Today as, "Moment of Bombing the Syrian City of Ra's al-Ein."

"Videos of Ra's al-Ein on the Syria-Turkey border, the moment when a bomb landed near two persons, after the beginning of the Turkish 'Peace Spring' military operation northeast Syria," the description reads.

Verify-Sy platform inspected the video and found that it is of Russian and Assad airstrikes on the village of al-Mentar in Hama's countryside.

Media professional Ebrahim al-Khateeb published the video on October 7, 2018, while he, with other media professionals, was covering the battels between the opposition and the Assad forces and its allies in Hama's countryside.

The video shows the moment a rocket landed, which targeted a number of media professionals near the power station of the village of al-Mentar in Hama's countryside.

Media professional and AFP photo/grapher EzZeddien al-Edlbi, who was one of the media professionals present at the site of bombardment, told Verify-Sy that while they were spotting the air traffic and shelling on Idlib's southern countryside, they were targeted by a barrel bomb, which resulted in the injury of one civilian.

Since the beginning of the Turkish military operation east of the Euphrates near the Syria-Turkey border, dozens of misleading photos and videos has circulated on social media.

Since the beginning of the operation, the Turkish forces has seized control of eight villages located in east and west of the border city of Tal Abyad in Raqqa’s northern countryside, located in opposite to the Turkish city of Akcakale; it has also captured six villages near the border city of Ra’s al-Ein in the countryside of al-Hasaka, which is located opposite to the district of Jilan Binar in the Turkish province of Sanliurfa.