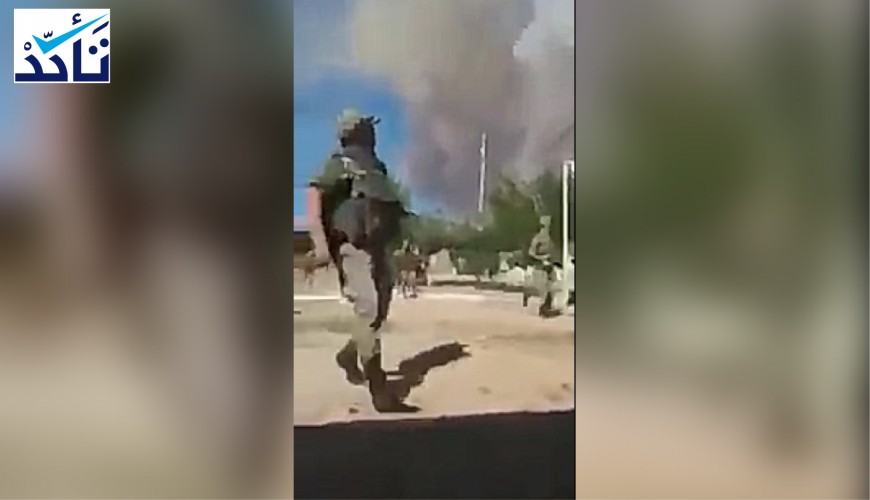 Social media news pages have circulated a video on October 10, one day after launching the Turkish offensive in northeast Syria, showing soldiers fleeing amid smoke plumes because of what appears to be an explosion.

A Facebook page called “Kri Sbi Kurdistania” has posted the video, claiming that it shows how “the Turkish army fled once the Turkish aggression has begun,” with no indication of the location of the incident.

The video has gone viral with 1200 shares. Another Facebook page called “Lybia Tajma’ona” has posted it.

On June 25, Verify-Sy inspected the video, when it was claimed to be of Rusian soldiers fleeing the Russian Hmeimim Air Base after being targeted by the opposition factions.

Verify-Sy clarified that the video was recorded in the Republic of Kazakhstan after blasts in an ammunition and weapons warehouse.

One civilian was killed and dozens were injured on June 24 because of the blasts in the town of Arys, according to the Kazakh authorities.

Verify-Sy previous report refutes the claims that the video shows soldiers of the Turkish army fleeing the battlefield during the beginning of the Turkish military operation in northeast Syria, which was launched on October 9.

Since the beginning of the Turkish military campaign last Wednesday, Verify-Sy team has debunked a number of fake news reports, fabricated photo, and misleading videos by publishing written and visual reports on its website and social media accounts.