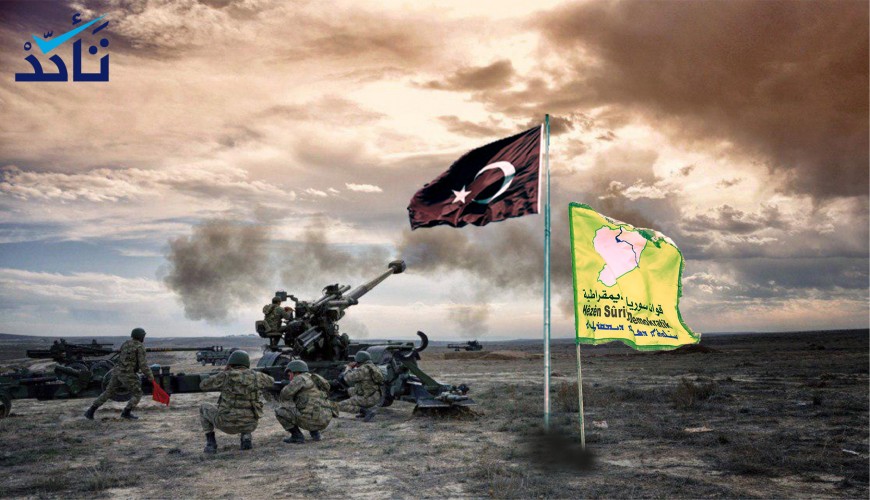 Verify-Sy team spotted in the past two days a number of misleading news reports, photos and video, which spread in coincide with the Turkish military campaign, jointly with factions of the Syrian revolution, against the Syrian Democratic Forces (SDF) continues in Northern Syria.

Russian news agency Sputnik reported Wednesday, October 16, that the Assad regime forces entered the city of Raqqa for the first time in five

years, while some social media pages claimed that these troops have raised the flag of the Syrian regime in the center of the city.

The above-mentioned media outlets did not publish any photos or videos that shows the alleged deployment of the Assad forces in the city of Raqqa, which is controlled by the SDF.

Verify-Sy platform reporter in Raqqa denied that the Assad regime forces entered the city as of 4 pm on Wednesday, October 16, 2019, explaining that the Assad forces deployed in the Brigade 93 near the town of Ain Issa north the city of Raqqa.

In addition, ABC News reported broadcast a video of heavy gunfire, and said that it shows violent Turkish attack on the city of Tal Abyad on October 11.

Verify-Sy inspected the video and found that it is unrelated to battles east of the Euphrates. Instead, it shows an annual machine gun event held by Knob Creek Gun Range in 2017.

Of note, ABC taken down the video and apologized to its audience for the error on Twitter.

Media organizations, including the Arabic-Language BBC and Asharq Al-Awsat newspaper, reported Sunday that a large number of ISIS combatants fled a detention facility in the town of Ain Issa northwest of Raqqa after Turkish shelling, claiming that the Turkish shelling caused the escape.

Verify-Sy platform had checked these claims by conducting interviews with IDPs who fled the camp of Ain Issa and civilians from the town on October 14. We reached the conclusion that the guards of the camp, who are members of the SDF, left their positions and had told the IDPs at the camp about that before they withdrew.

Our reporter also confirmed Monday that the area of Ain Issa and the camp named after it were not targeted by airstrikes or shelling since the beginning of the Turkish operation in Northern Syria.

Besides, social media pages close to the Democratic Union Party (PYD) circulated a video of children who were crying inside destroyed building, with a text that reads, "Peace to Rojava," referring to areas in Northern Syria controlled by PYD, which is known among Kurds as Rojava or Western Kurdistan.

Verify-Sy platform inspected the video and reached the conclusion that it was not taken in the PYD-held areas; the footage was taken from larger video of rescuing children and civilians following an airstrike by the Assad regime and its allies against the city of Ma'aret al-Nou'man in Idlib's countryside last May.

In the same context, a news page posted Friday, October 11, a video in which two members of the White Helmets appear pulling out a child from under the rubble. “Two children begging to rescue their little brother from under the rubble, after a fascist Turkish shelling that targeted Kurds in Rojava,” the post reads.

Verify-Sy searched for the original video and found that it was taken after the Assad regime and Russia airstrikes against Idlib’s countryside, not after Turkish shelling on northeast Syria.

Another Facebook page called “Kri Sbi Kurdistania” posted a video on October 10, showing individuals dressed in military uniform fleeing, claiming that it shows how “the Turkish army fled once the Turkish aggression has begun.”

Verify-Sy inspected the video on June 25, when it was claimed to be of Rusian soldiers fleeing the Russian Hmeimim Air Base after being targeted by the opposition factions.

Verify-Sy clarified that the video was recorded in the Republic of Kazakhstan after blasts in an ammunition and weapons warehouse.

In addition, Tweeters reported that the Assad regime forces intend to enter the Syrian cities of Manbij and Ayn al-Arab/Kobani to fight the Turkish-backed opposition forces and send them back to where they came from.

They attached to their posts a video of a military statement by Assad regime spokesperson Ali Mayhoub, in which he says the regime forces entered the city of Manbij and raised the flag of the regime there.

Verify-St platform inspected the video statement and found that it dates back to January 2018, when the Assad regime announced entering Manbij following a request by the Democratic Union Party (PYD). Its forces, however, entered limited areas in the countryside of Manbij including the al-Arima district.

Tweeters posted a photo of men dressed in military uniform, claiming that it shows U.S. soldiers feeling ashamed in front of the Kurdish people in the Khrab al-'esh military base near Kubani.

Verify-Sy platform searched for the photo, and found that it is of the U.S. troops in the Kuwaiti al-Jahra military base in 2011.

Verify-Sy platform inspected the video and found that it is unrelated to the Kurdish-U.S. affairs, and the woman who appears in the video is Italian satirist journalist Alice Martinelli, she gave a piece of cheese of Parmigiano-Reggiano to the secretary on October 2, expressing Italy’s concerns about Washington’s policy that might threaten Italian food industry.