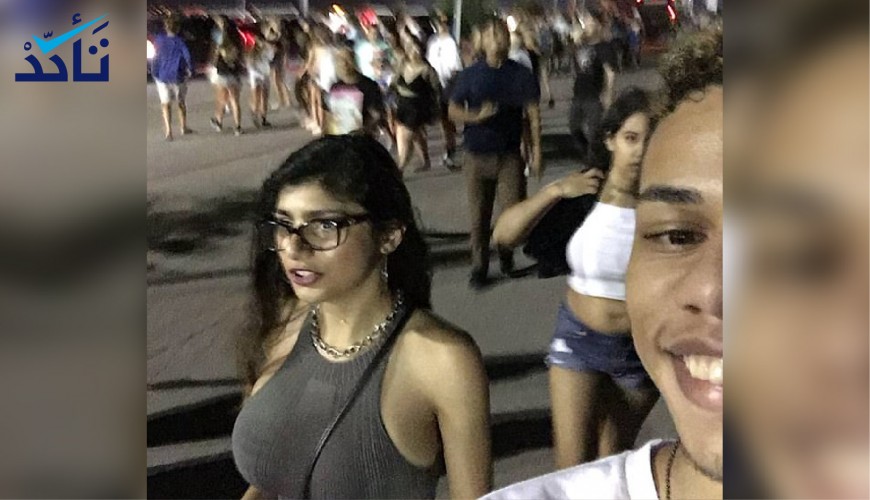 A photo of Mia Khalifa, a Lebanese-U.S. former adult film actress, has recently circulated on social media; it has been claimed that the photo shows Khalifa participating in the recent demonstrations in Lebanon against the Lebanese government.

The selfie photo shows Khalifa in the middle of a crowd, a photo that seems to be taken unexpectedly.

A Facebook page called “Syrer in Deutschland” posted the photo, claiming that she “takes the lead on Lebanon’s demonstrations,” while another page claimed “the Lebanese actress Mia Khalifa participates in the demonstrations” in Lebanon. In addition, a tweeter claimed that Khalifa “leads the demonstrations.”

Verify-Sy inspected the photo and found that it is an old one, which is unrelated to the current events in Lebanon.

The photo dates back to 2017 when a man, Jared, had snapped a photo with Mia Khalifa without her permission in the U.S. state of Texas; the man claimed that Khalifa then punched him, according to the San Antonio Express-News newspaper.

“Got a pic with Mia Khalifa and she punched me in the face and left a bruise,” Jared tweeted, sharing before and after photos.

Khalifa shared on Twitter a tweet about the demonstrations in Lebanon by Zeina Khodor, a  journalist for the Al Jazeera English channel, which reads, “Public anger growing #Lebanon - Protesters took to the streets and blocked key roads across country over government’s plan to impose new taxes, especially a tax on voice calls via internet apps. Protests spread outside Beirut despite decision to reverse decision on new taxes.” Khalifa described the tweet as “the most ‘Lebanon’ thing” she has ever read. Khalifa’s tweet was later removed from her Twitter account.

Mia Khalifa is known as a former adult film actress. She has a B.A. in history from the University of Texas at El Paso (UTEP).

Verify-Sy team have not found any photos or videos of Khalifa participating in the recent demonstration in Lebanon, neither on her Instagram or Facebook accounts.

Massive demonstrations have erupted in several Lebanese cities and towns last Thursday, protesting against taxes and corruption, which have escalated into demanding the toppling of the Lebanese government due to the economic crisis.