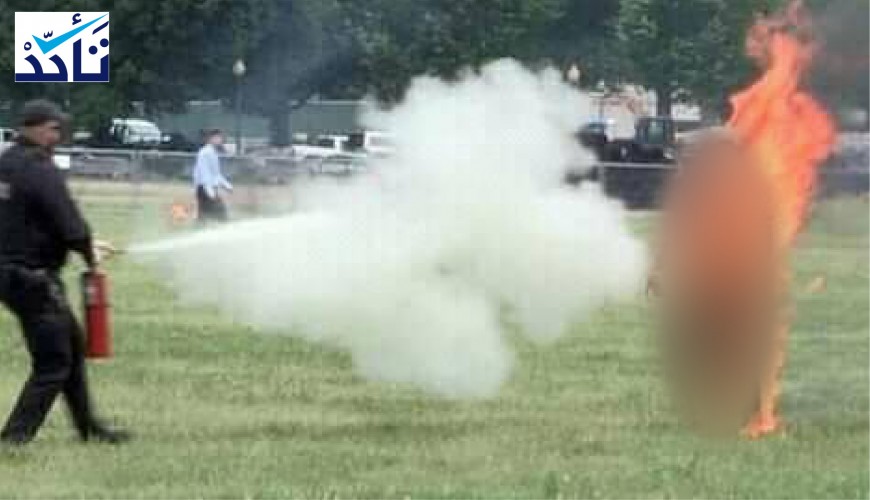 News outlets and Facebook pages have circulated a photo of a man caught on fire, claiming that it shows a Kurdish man from al-Hasakah who set himself on fire outside the U.N. headquarters in Geneva.

The photo shows a person caught on fire and in front of him a person who appears to be attempting to extinguish the flames by a fire extinguisher.

In an article on its official website, the Democratic Union Party (YPG) have published the photo and reported that “a Kurdish man set himself on fire in front of the U.N. headquarters in Geneva, protesting the Turkish hostilities and international silence.” It added that the young man, Ali al-Wazir, is a supporter of the party from Syria’s al-Hasakah, who resides in Germany.

In addition, al-Hasakah Net has posted the same photo claiming that “a Kurdish young man from al-Hasakah set himself on fire in front of the UNHCR in Geneva protesting the international complicity against the Kurdish areas.”

The circulation of the photo coincided with the event of a Syrian Kurdish young man who set himself on fire outside the United Nations High Commissioner for Refugees (UNHCR) in Geneva, on Wednesday. Local police said they suspected the motive was political.

Verify-Sy platform checked the photo and reached a conclusion that it is of a U.S. man who set himself on fire around 5 months ago.

According to the Washington Post, Arnav Gupta, 33, set himself on fire on outside the White House on May 29, 2019, and died later that evening. Police said they found no notes or other items at the scene to help understand the motive that led the man to burn himself, according to the same newspaper.

The launch of the Turkish military action in northeast Syria coincided with a flow of misleading photos and videos, some of which have been spotted and clarified by Verify-Sy.

Turkey’s defense ministry declared Wednesday halting its military operation in northeast Syria after reaching a deal with Russia, which states that the Syrian Democratic Forces (SDF) have to withdraw 32 km away from the Syria-Turkey border, with Russian assurances. Besides, Russia and Turkey will jointly patrol a 10-km-wide strip.