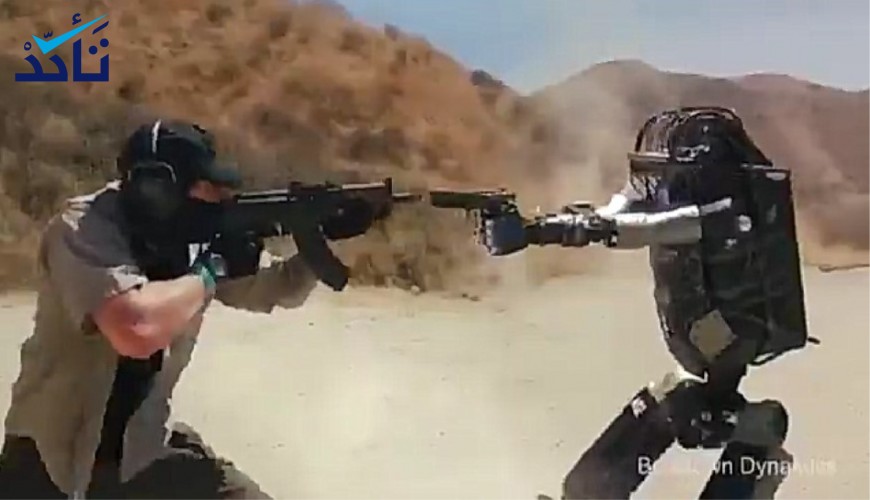 Footage of what has been claimed to be a fighting robot, made by a U.S. army contractor, has circulated on social media. The video has gone viral on Facebook and Twitter, with hundreds of comments and shares.

The video shows a man-sized armed robot subjected to a field test and surrounded by a number of men who are training it.

Journalist Samer al-Any has posted the video Thursday with a text that reads, “U.S. firm Boston Dynamics, specialized in manufacturing fighting robots for the U.S. Army, published this video, which is a test of one of the fighting robots.”

Facebook page “Marrakesh al-Hamra” has also posted the video Tuesday saying, “The military robot.. Awesome.. And we are still proud of making the biggest Tajine;” the post has over 230 shares. Tajine is a traditional Maghrebi dish.

Verify-Sy inspected the video and found that it is a fake scenario and the robot is not real. Besides, Boston Dynamics, a leading robotics firm, has not produced the video.

In fact, Corridor Digital, a U.S.-based production company, created the video, placing the watermark of Boston Dynamics, with an extra S, on the video. In addition, what appears to be a robot in the video is actually a man; the production company used high visual effects to create the video.

Of note, during an October event called “Interpolitex”, Russian firm Promobot introduced a police robot, saying that it hopes the man-shaped robot will serve at the Russian police in 2030.