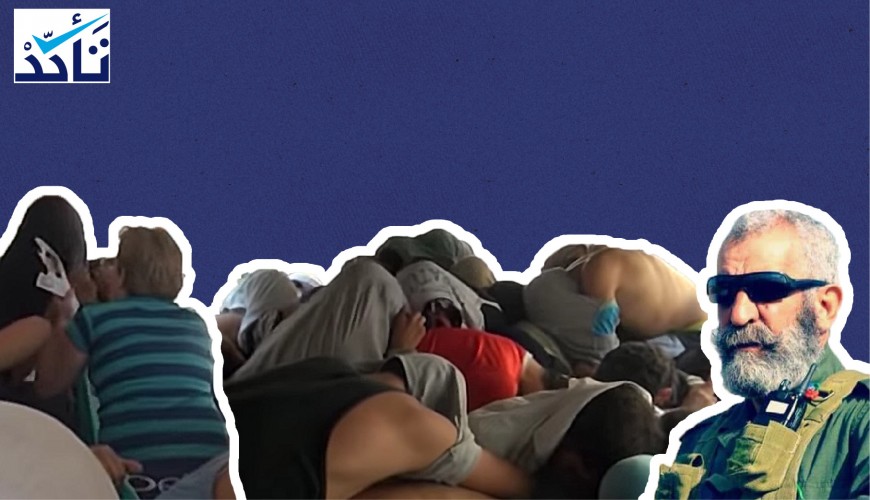 A video recording was lately widely circulated among various social networks. It shows a number of detained men in a bus getting humiliated, cursed, and hit by women who were inside the bus and outside it.

The video also features soldiers from Assad's regime forces accompanied by Officer Issam Zahr Al-Din who was killed on October 18 th /2017 in the city of Deir Az-Zor in the East of Syria.

Some of those who reposted the video said that the detained men in the bus are "returning to the bliss of homeland" which is an expression commonly used to describe individuals opposing the Assad regime who deserted the opposition held territories and returned to live in Assad controlled areas.

Al-Jazeera Media man, Faisal Al-Qassem retweeted the video under a tweet reading:"watch how were those returning to the bliss of homeland welcomed home in Assad's Syria under the control of Issam Zahr Al-Din". His tweet was retweeted more that /570/ times. 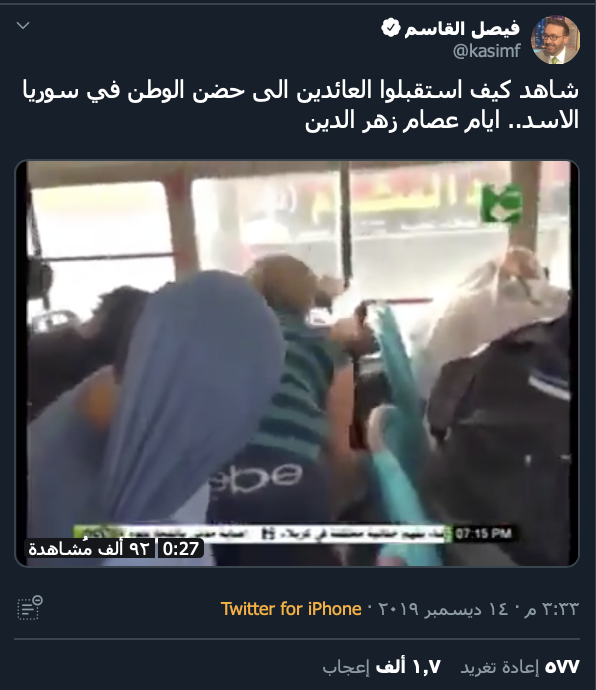 Verify-Sy team traced the video back and discovered that it was cut from a /23/ minutes-long report broadcasted by the Iraqi Al-Ghadeer Satellite channel whose logo appears in the video. However, this logo was an old version and was later changed into a different logo.

The original recording shows a raid by the Assad's regime forces on the Hajar Aswad neighborhood in the Countryside of Damascus. This is confirmed by Officer Zahr Al-Din himself at minute 06:07 of the report while talking on a phone call specifying Hajar Aswad Amusement Park as a target for military operations. According to the Violation Documentation Centre in Syria, Hajar Aswad neighborhood was targeted by a comprehensive military operation on July 31st / 2012 led by the forces of the Assad's regime.

In addition, the news bar of Al-Ghadeer channel which appears in the video features some headlines about some past events coinciding with that period like the Putin-Macron meeting regarding the Syria crisis which has occured on August 3 rd /2012.

As for the individuals featured in the video getting hit and called bad names by a few women, it seems they are detainees captured by Assad forces during that operation. Verify-Sy could not verify their identities. However, activists from Hajar Aswad neighborhood witnessed the operation then, and testified that some of those detainees were civilian opposers of the Assad regime while others were armed fighters belonging to the "Free Army". In fact, they insist that those young men are definitely not "returning to the bliss of Homeland " as was recently circulated.

OF NOTE, many Syrians who had "returned to the bliss of Homeland " in the past few years were subjected by the security and military forces of the Assad regime to detainment or forced disappearance as soon as they returned to Assad-controlled areas