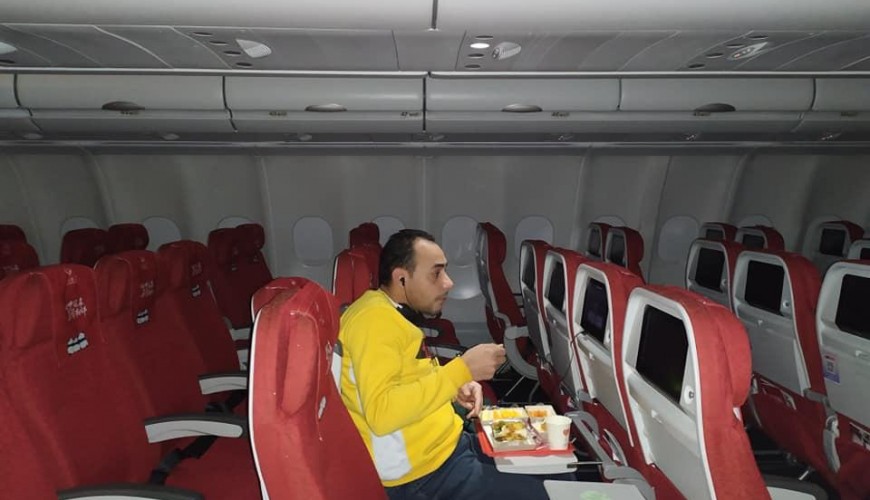 Man in This Photo Isn’t Syrian

A photo of a young man having lunch in an airplane has been circulated on social media. The man seems to be on his own on the flight.

Several Facebook pages and Twitter accounts claimed the young man comes from Syria. Also, it was claimed he was alone on a UAE Airlines flight that had taken off from Dubai to Beijing; Among the accounts that circulated the claims are a Facebook page called “Latakia Now” and a twitter account named Major Abu Moaz Rahhal.

Verify-Sy Platform reached out to the person who took the photo, Mahmoud al-Omar, a 27-year-old man from Egypt. He said he had posted several photos of himself and his friend during their flight on his Facebook page “Dubby Khazer.”

Al-Omar told Verify-Sy that he had taken the viral photo, in which his friend Abdulsalam Mamdouh appears, while they had been travelling from Jinan, the capital of eastern China's Shandong province, to Egypt's capital city of Cairo. He also said he had taken a Chinese Sichuan Airlines flight, not a UAE Airlines one. Besides, al-Omar said some social media accounts had claimed he is Iraqi, while others had claimed he comes from Libya.

Chinese authorities said the death toll has risen to over 300 people nationwide as a result of the coronavirus outbreak, while 15,000 have been infected, according to the BBC.