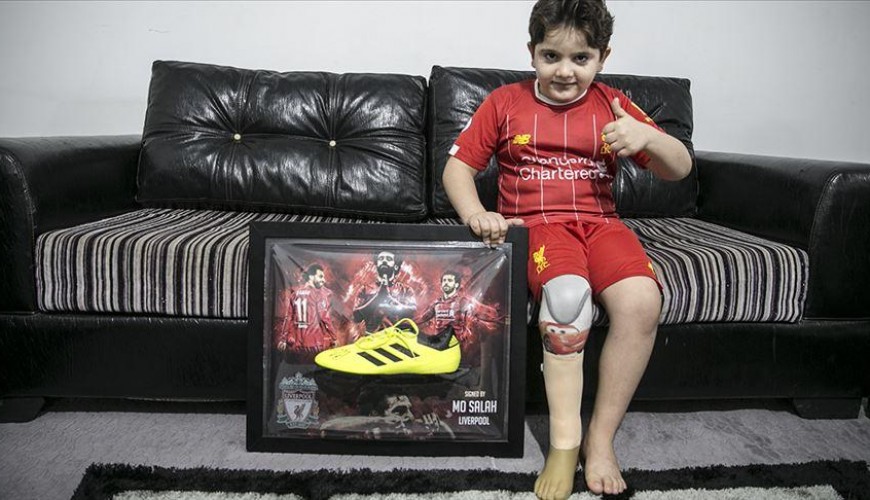 Did Mohamed Salah Send Boot, T-Shirt to Syrian Child Whose Leg Was Amputated?

Several Arabic-language and English-language news websites have recently claimed that Liverpool star Mohamed Salah sent a signed boot to a Syrian child whose leg was amputated in the war in Syria.

Egyptian online newspaper Youm7 published on Feb. 19, 2020, a report titled, “Mohamed Salah Sends His Boot as Gift to Syrian Child Who Lost His Leg in Explosions in Syria,” saying that  Salah has reportedly “undertook a brilliant act of kindness towards a Syrian child who suffers a horrible incident due to the wars in the sister country recently.”

Youm7 has cited Bleacher Report Football, a website specialized in sports and sports culture, indicating that Salah “gave a signed boot to Syrian child Khamees al-Jaser after a part of his leg had been amputated in an explosion in Syria To compensate him for his traumatic accident and lessen the pain of his loss.”

A Bleacher Report Football post on Facebook, which contains a photo of the child, said that “8-year-old Hamis al Gacir lost part of his leg in a bomb attack in Syria, but he still loves playing football,” adding that “Mohamed Salah sent him a signed boot.”

Besides, Arabi 21 website published a report on Feb. 20, 2020, titled, “Present from Mohamed Salah to Child Who Lost His Leg in Syrian War.”

“Egyptian player Mohamed Salah surprised a Syrian child whose leg was injured in his foot because of the war in his country.” Arabi 21 reported. “The child Khamees al-Jaser lost a part of his right leg in bombings in Syria. He lives in a refugee camp in Turkey.”

Arabi 21, citing Bleacher Report Football, has reported that “Salah sent his signed boot to Khamees who likes to play football to raise his morale.”

Also, Rotana published the news in a report on similar initiatives by Egyptian star Salah, saying that the latest of “Salah’s acts of kindness was giving his own boot to a 8-year-old Syrian child called Hamzeh. (Salah) offered his signed boot as a kind of psychological support to him, after he lost his leg in a tragic incident.”

What is the misinformation in these reports?

- The claim that the signed boot was sent by Mohamed Salah to the Syrian child.

Verify-Sy Platform reached out to the child’s father, Thraa Ghagar, who denied that Salah sent the gift to his son Khamees.

The father said a U.K.-based businessman bought a boot and a T-shirt for his son from a Liverpool FC store, which sells sportswear signed by the football team members. The businessman sent the gift to Khamees after he had known the child admires Salah and Liverpool FC.

Ghagar said his son is receiving physical therapy in a center for prosthetic limbs and rehabilitation in Turkey. Therefore, he and his son must stay in Turkey while the mother and the rest of the family live at a refugee camp in northern Syria after they were forced to flee their hometown that was recently captured by the Assad regime.

Ghagar told Verify-Sy that his son needs additional health care as well as a chance to enrol in a school to be able to catch up with children of his age and gain knowledge he missed out over the past couple of years, which means additional expenditures that the father cannot afford currently.