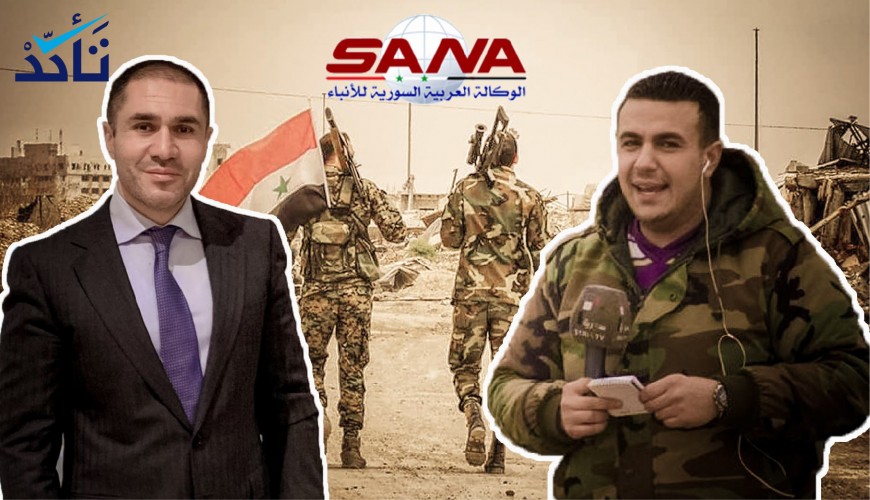 Turkey’s army and its Syrian allies have launched a military operation on Feb. 20, 2020, against areas controlled by the Assad regime in rural Idlib, especially the al-Nairab area that witnessed progress and retreat of Turkey and its allies on the same day, while the attacking forces have targeted positions of the Assad regime in Saraqib, Dadiekh, Afes, and Kafr Battiekh without penetrating these areas.

These battles have coincided with viral fake news as well as circulating unrelated photos and footage. This report displays the most prominent misleading news materials spread over the past two days.

What is the misinformation that has gone viral?

Shadi Helwa, a field reporter at Assad’s SANA news agency, has posted the photo, claiming that the Assad regime had destroyed it. In addition, member of Assad’s so-called parliament and businessman Fares Shehabi has posted the photo with the same false claim, as well as a number of pro-Assad regime news pages such as Al-Hamdaniah News  Network.

Verify-Sy Platform fact-checked the photo by using the reverse image technique, and by using suitable keywords, and found that the photo shows a Turkish tank, but it is unrelated to the recent battles in al-Nairab. In fact, the tank was destroyed during battles between ISIS and the Turkish army and its allies in the Jabal al-Sheikh Akiel in late 2016 and early 2017.

The photo was posted on Imgur, an American online image sharing community and image host, on Jan. 21, 2017.

2- A burning tank. Assad loyalists have claimed that Assad’s forces have completely destroyed it. In fact, it is a U.S. tank destroyed by an explosion east of Baghdad in 2016 (BBC and Getty Images).

Another photo of a burning tank was posted by loyalists of the regime of Bashar al-Assad.  A Facebook page named “al-Sha’b Fi Zaman al-Harb,” or “The People at Time of War,” has posted the photo, claiming that it shows an Altay tank destroyed by an RPG bomb. If fact, it is a U.S. Abrams tank. Getty Images posted the photo from a closer position, reporting that it was targeted by an improvised explosive device (IED) in eastern Baghdad on Mar. 10, 2006.

3- Footage shows armored vehicles. Assad loyalists have claimed they belong to Turkish army and were destroyed by the regime forces in rural Idlib. In fact, they are vehicles of the Syrian armed opposition destroyed in rural Aleppo.

Footage showing destroyed vehicles and aerial bombardment has been posted by pro-Assad regime social media accounts and pages. Aleppo News, a Facebook page with over 450,000 followers, has claimed that the footage “shows vehicles and armoured vehicles of the Turkish army burning by the Syrian Army’s attacks around al-nairab in rural Idlib.” In fact, the footage was published by Abkhazian Network News Agency (ANNA), which had accompanied the Assad regime forces during its military operations on Feb. 18, 2020, two days before the launching of Turkey’s military operation in the al-Nairab area in rural Idlib. The video shows Assad regime forces’ operations in the villages and areas of Kafr Halab, Myznaz, Urem al-Kubra, and the outskirts of Khan al-Asal on Feb. 16.

Here is an archived link of Aleppo News’s post.

4- A photo of several military and armoured vehicles. Fares Shehab has claimed that they are Turkish vehicles destroyed by the Assad forces in al-Nairab. In fact, they are vehicles that were destroyed in rural Aleppo during the advancements of the Assad regime.

Fares Shehabi has also claimed on Feb. 21 that the photo shows a number of photos of dozens of Turkish tanks and military vehicles destroyed or damaged. “Turkish army vehicles in #Neirab, #Idlib after three hours only..!” he said on his Facebook page. “We told Erdogan Syria is not northern Cyprus but he did not listen..! This is a humiliation of historical proportions for NATO's second largest army..! Again, why sending Turkey's boys to die for al-Qaeda?!”

Shehabi’s post has been  shared over 200 times despite the fact that all the photos are not related to the battles of the al-Nairab area. In fact, they were taken from the above-mentioned ANNA report published two days before the beginning of the attack of Turkey and its allies on the al-Nairab area.

The footage shows a number of damaged vehicles of the Syrian armed opposition during battles against the Assad forces in the areas of Kafr Halab and Urem al-Kubra, according to ANNA.

Verify-Sy Platform reviewed the footage and fact-checked all the photos used by Shehabi in his misleading post. You can view these photos in the above-mentioned footage as numbered in the post by viewing the following links, each of them was numbered according to the photos’ numbers in the post: 1, 2, 3, 4, 5, 6, 7, 8, 9, and 10.

However, Assad loyalists were not the only ones spreading misleading information.

5- Footage shows personnel of the Assad regime forces during clashes. Anti-Assad pages have claimed that they were retreating under the attacks of the opposition attacks in rural Idlib. In fact, footage was taken in rural Aleppo.

Al-Hadath Syria, a Facebook page with over 675 followers, has posted footage showing soldiers of the Assad forces engaged in battles against the armed opposition, claiming that a Russian news agency had captured the retreat of the regime forces from al-Nairab. In fact, the footage was taken from ANNA’s above-mentioned report. Al-Hadath Syria’s footage can be seen at 30:27 of the report.

6- Footage of rocket launchers. It has been claimed that it shows Turkish forces targeted the Assad forces in Saraqib. In fact, it was captured during “Operation Olive Branch” in rural Afrin.

Another video showing rockets being launched from a rocket launcher has been posted by several pages. It has been claimed that it shows Turkish forces targeting the command center of the Assad forces in Saraqib. In fact, it is an old video that was circulated around 2 years ago. At the time, Turkish websites and news channels reported that it shows Turkey’s army targeting Democratic Union Party (PYD)’s positions in the Aleppo countryside.

The Turkish-backed Syrian opposition factions have seized control of the al-Nairab village on Feb. 24, 2019, after battles against Assad’s forces, three days after a failed attack on the area.