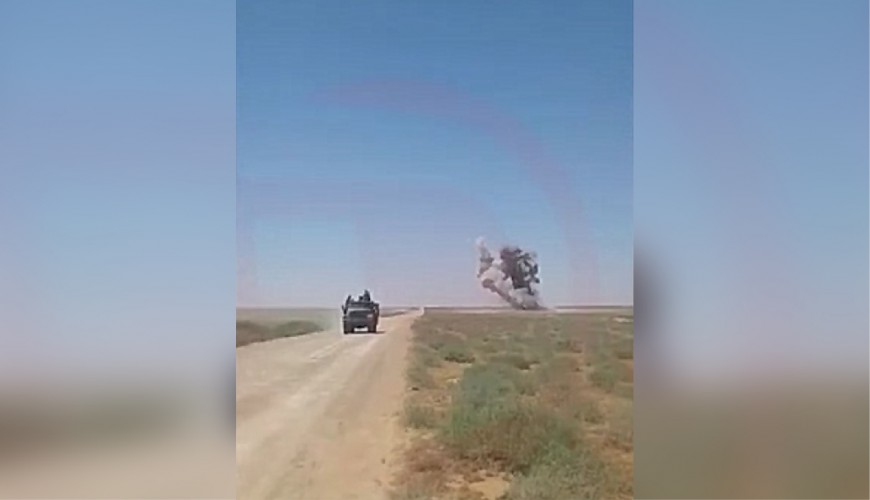 A number of Facebook pages have posted footage claiming that it shows a joint military convoy of the so-called “al-Quds Brigade” and the pro-Assad “National Defense Forces” shortly before combing the Shula desert of Deir al-Zour Province.

It’s been claimed that the al-Badia 24 page had exclusively obtained the video and that one of the military vehicles was destroyed by a landmine resulting in the killing of four members of the pro-Assad al-Quds Brigade.

A number of military vehicles and men dressed in military uniform appear in the video. However, it is not clear to which side they belong.

Verify-Sy Platform fact-checked the video and found that it is not new. In fact, a number of Facebook pages, including Deir al-Zour 24, have posted the footage in July 2019 saying that it shows casualties of the Assad regime forces due to a landmine explosion.

Verify-Sy Platform could not identify the armed men in the footage or when or where it was filmed. However, the fact that it was circulated months ago refutes the above-mentioned claims.

On April 6, the “al-Quds Brigade - Latakia Squad ” page announced that four members of the brigade had been killed in a landmine explosion during combing the Shula desert located to the west of Deir al-Zour.

According to the page, the members who were killed are Abdullah al-Ahmad, Mahmoud Mohammad Taha al-Aoun, Sameer Wassim Zain al-Deen and Yahya Mustafa Ashlam.

The Assad forces and allied militias are being attacked in their areas of control in rural Deir al-Zour which has been resulting in deaths and injuries in their ranks.