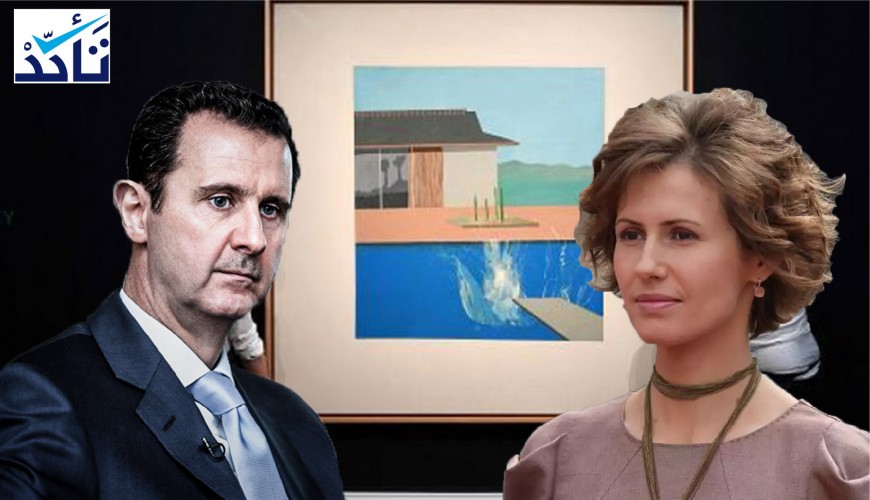 In mid-April, claims spread that Bashar al-Assad, head of the Assad regime, bought David Hockney’s artwork “The Splash” for 23.1£ million as a gift for his wife Asma.

Some news websites attributed the news to Russian website gosnovosti.com, while others attributed it to rosbalt.ru.

In addition, rosbalt.ru attributed the news of buying the artwork to Rusian website niros.ru which in turn attributed it to gosnovosti.com. Therefore, gosnovosti.com appears to be the Russian origin of this news in Russia, which published its claims on April 15 at 18:17, followed by niros.ru and rosbalt.ru at 20:13 of the same day.

Gosnovosti.com attributed its information to Arabic media and included a screenshot of a tweet by Twitter user @AlkinjMohammed. Verify-Sy reached out to the tweeter who said he had obtained his information from WhatsApp news groups. He said he had removed the tweet after questioning the authenticity of the claim.

Verify-Sy could not spot any Arabic news report that had posted the news of buying “The Splash” by Assad before Gosnovosti.com did.

Dozens of Syrian media figures, news websites, and TV channels reported on and analyzed the claim without verifying it; some of which linked the news to the rising tension between Assad and his cousin Rami Makhlouf.

Besides, the claim was mentioned in several reports and chat shows including two video reports headlined, “The Painting Scandal .. How Rami Makhlouf took revenge against Asmaa al-Assad” and “A $30 Million Gift.. A Painting from Assad to his wife.”

Furthermore, international news outlets reported the claim including DW and Le Monde, both attributed the news to Russian media.

U.S. media mogul David Geffen paid $30 million for “The Splash” by British painter David Hockney, according to a person familiar with the transaction, Bloomberg reported on February 14.

Also, The Times, citing Bloomberg, said Geffen paid £23.1 million for Hockney’s “The Splash,” which has been the highlight of this year’s London auction season.

According to a Sotheby's catalogue, Geffen had previously owned the painting before selling it in 1985, The Times continued.